It was one of those slow drizzle, cloudy, damp, and cold, not-gonna-get-squat- done-unless-we-absolutely-have-to kinda days. The barn was messy since the stall boy wouldn’t come until after school, so I started cleaning stalls to build more character and alleviate the boredom while Mark reorganized his bridles and cleaned up the tack room. Hearing a truck coming down the gravel drive, we wondered who else was killing time today. A dark haired lady in her early forties entered the barn and shook off. Mark smiled in greeting and said hello as Skeeto, the Border Collie, walked up to her and gave her a timid sniff. The lady asked if this was the horse training barn she had heard about, and Mark replied, “It might be.” She was somewhat bothered, a little fidgety, a touch aggressive, and the sort who talked loud and didn’t allow others into her conversation. I have since mastered the impulse to sack people out, but I’m sure I could have fixed her. I don’t think she noticed me cleaning a stall nearby and I, having learned how valuable being invisible can be, kept a low profile.

A 7 year old chestnut gelding turned out to be her problem. He was a good horse, who just needed a better handle. At least, that’s how the story started, but people don’t get this worked up over a poor handling horse. Her story was like a dime novel, and would unravel itself quickly with a foreseeable twist. Mark isn’t the kind to talk much, especially if someone else already is, so he just stood back and let her go, adding the occasional ‘ummm’. I don’t remember all of the filler to her story, but I know it took her about 5 minutes of unsolicited chatter before she let slip that the horse had flipped over on her husband this past weekend, hurting his back pretty badly, breaking five ribs, and putting him in the hospital. This jewel of information was urgently followed with “but he’s a good horse!”

Mark didn’t flee the scene after hearing her water tester, so she dug in a little deeper. She took only a minute or two more before adding that the horse had apparently spooked several months ago and run over her son, breaking his arm, “but he’s a good horse!” An uncle had also accidentally been bucked off and onto the pipe rails of the arena while trying to rope off of this good ol’ horse. He’d only bruised a few ribs, you see, it was no big deal, “and he’s such a good horse.” It is common that customers have unrealistic views of their horses. It is, after all, human nature to believe that whatever you have is superior to what everyone else has, but this lady was taking it to a new level. She laid no blame or possibility that any of these accidents and occurrences had anything to do with the gelding, and indeed blindly defended the horse first, placing total blame on her crippled and maimed family. By this time I had stopped working altogether as I listened intently to see if the gelding had as yet claimed a life. No one pays much attention to the assistants. I guess I understand why, but I knew what the public doesn’t. I was the one who was going to have to risk life and limb on this sucker, so I wanted to learn the real scoop. By the time she was through, this Good Horse had maimed, broken, bent, or terrified most of her friends, family, and acquaintances. 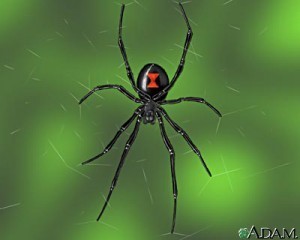 I wondered if she was a Femme Fatal and this really was her kinda horse. Her husband was now threatening to sell his alleged attacker. He must not have owned a gun! So, she had loaded the gelding and taken him off their place while the hubby was still in traction. He was right there in the driveway, in her trailer. Isn’t that nice of her? On top of the privilege of riding a horse that has hurt several others, I also got to go out in the rain to get him. I really want to know what in the world a horse would have to do to be a bad horse in this lady’s mind. As it turned out, the gelding wasn’t that bad. After a lot of hard work the first week, the gelding came my way and was alright, though the husband won out and they sold him anyway, for a good price, to an aspiring trainer’s assistant. The point of this tale is quite simple really, I know where there’s a real good horse for sale if you know anyone lookin’.