Courtney Bynog owns and runs Triple Lynn Farm, a breeding and sales prep operation for racing Quarter Horses.   Courtney’s land has a long history:  her maternal grandparents owned many acres of land on Rigolette Road in Pineville, where Courtney was born and raised.  She was brought up surrounded by animals–chickens, bunnies, dogs, horses, and cattle—and loved them all. Her grandfather’s businesses were Baker APS, a leader in pharmacy automation, and Baker Manufacturing, still going strong, and a leader in state-of-the-art ergonomic office furniture.  The old Baker company warehouse on Rigolette is becoming the centerpiece of Courtney’s horse operation.  “State-of-the-art” also applies to Courtney’s plans:  beautiful stalls, rubber mats, lots of storage, indoor round pen, and video surveillance for foaling mares.  Courtney is building a lovely home just across the pond from the horse operation. The house looks over rolling hills, which are fertilized and waiting for the first crop of hay this year.  “Everything’s coming together.  I’m looking forward to relaxing, getting my life settled down, enjoying more family time, and working with horses the way I want to.”

“Rigolette is pronounced ‘ROH-gully,’” Courtney says. Growing up on “Rohgully Road” was perfect for a horse-crazy tomboy.  She played in the woods and in the creeks and rode her first horse, a Welsh pony, up and down the road for miles.  “I stood on a bucket to put the saddle on!”

There was a horse farm down the road that captured Courtney’s imagination. She’d hang on the fence and daydream about the horses in the pastures.  It wasn’t a big place, but she could tell that the owner was serious about horses.  One day the owner, an elderly gentleman, invited Courtney in and showed her all his trophies and plaques from racing Quarter Horses. “I became the owner’s friend,” she says.  “He was like another grandpa to me.  I loved hearing his stories, and I learned a lot about the racing world from him.  Years later I bought one of my first racehorses from him!” 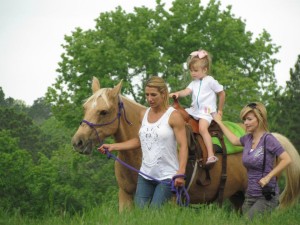 As Courtney grew up, her horse passion continued. She tried everything:  playdays, exercise riding, trail rides, barrel racing, and team penning.  She attended the Martha Josey barrel racing camp and did some show jumping at a camp in Kentucky.  She visited the Kentucky Horse Park, which fired up her imagination so much that she made albums of cut-out horse pictures and did reports on horses for school.  She read books and watched movies about horses…a lot.  “I saw Bluegrass with Cheryl Ladd a hundred times.  I loved it because of the horses, the farms, the trucks and trailers, the races, all the Kentucky scenes.”  The more she read and dreamed about Kentucky, the more she became enamored of racing.  Pineville wasn’t Kentucky, though—most of the riding horses and racehorses there were Quarter Horses.

Being horse-crazy is a stage almost every little girl passes through. For Courtney, the passion never ended.  “My senior year of high school my grandfather bought me my first Quarter Horse.  I took her to college with me.  (She died last year, at 28)  As the years passed, and I became a mom and started working for the family business, I still kept dreaming about horses.”   She thought hard about how she could keep horses in her life and turn her love of horses into a successful business.

Courtney and her mother were very close.  One year they and Courtney’s two children took a vacation in Kentucky, driving from farm to farm.  “Victoria was one year old and Brady was four,” she says. “I could see my dream in front of me.  We saw all the beautiful, famous farms in Lexington and Louisville—Calumet, Gainesway.  It was breeding season!  A real educational trip.  We saw foaling barns, stallion barns…we patted the noses of horses with $600,000 stud fees…we even drove by the house that was in Bluegrass.”

After the trip Courtney’s mother said, “I know it is your dream to have a life with horses. I am willing to support this dream.  But I have a serious question—the answer will make or break things—if we start a horse business, you can’t get attached to every one!  Will be able to sell them, to let them go?”  Courtney assured her mother that she could make a horse business work.  They named the enterprise Triple Lynn Farm, because Courtney, her daughter, and her mother all have “Lynn” as their middle name.

She did her research. “I decided that mare care, breeding, and sales prep would be the best choice for me.”  She could stay home on the farm with her children.  Courtney went to Lake Charles for the yearling sale and met Laverne Perry, of the Louisiana Quarter Horse Breeders Association.  “I started picking his brain,” she says.  “He saw how interested I was, and he offered me a job at his barn, learning and observing and doing.  Then I went to work at Lyle and Carl Guillory’s farms.  From there, I went to Louisiana Quarter Horse, where I worked in the office for a year.” 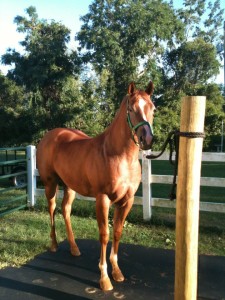 Courtney’s grandparents both passed away in 2003, and her mother passed away in 2006. “We started Triple Lynn in 2000,” says Courtney, “so my mother and my grandparents saw me get started doing what I love.  My mom would sit with me when I was doing foal watch.  She liked to observe the farm, see how I was doing.  She and my grandfather loved to drive or walk around the pastures.  That was a family ritual, driving around looking at the longhorns with my grandfather, in later years driving around with my mom, looking at horses.  To this day all I need to do is go out in the pasture, look at the horses, and feel happiness and serenity and peace.”

“I am sentimental,” says Courtney. “I name all my horses after my children, my mother, my grandparents…”  When Courtney’s house is finished, she and her family will be right across the woods from her sister.  “She loves animals, too.”  The family tradition on “Rohgully Road” goes on.

However, just when you think you’ve figured out a person, you get a surprise. Yes, Courtney is a hard worker, but just how hard?

“Five years ago, I went to a camp to learn about nutrition—for people. Everyone there thought I was a competitor.  What were they talking about?  I looked into it and discovered the world of natural physique events.”  Unlike bodybuilding, “natural physique” emphasizes healthy nourishment, no steroids, and “normal” muscling.  “I hired a nutritionist to help me figure what to eat.  In just a short time of competing, I won lots of medals and eight trophies.  Having someone tell me what, when, and how to eat made it possible for me to win all those shows.  I realized that understanding nutrition can transform your body—and the body of a racehorse, too.  My nutritionist and my fellow competitors taught me that every person is different and needs to be nourished in his or her own way.”

“Our diet and exercise goals are similar to the goals we have for our horses. Same terminology.  Look at the individual, and figure out what is needed. If you just need to put on weight, not necessarily muscle, you raise the fat content of the diet.  For horses, I use rice bran or beet pulp.  But when we sales prep, we increase exercise and we up the protein, to get their muscles more ‘cut.’  I like alfalfa for adding protein, but you have to be careful not to get the protein percentage too high.”  (A recent study at Cornell suggests that feeding a high-protein diet to horses is not necessarily dangerous, but requires better management, because of increased sweating, decreased feed efficiency, and higher cost. http://www.iceep.org/pdf/iceep1/_1201141137_001.pdf )  “For myself and for my horses, I believe in vitamins and supplements.”

When Courtney wants to give a horse a good workout, she longes him in a round pen with deep sand. “Be careful,” she says, “if you’re doing hard cardio to take off fat.  I learned in my own competing that when the fat is gone, you’ll start taking off muscle!”  Courtney swears by interval training for humans and horses.  In the round pen, for a horse, she will alternate a slow jog and a fast lope; in the weight room, for herself, she practices “circuit training” – moving fast from one weight machine to the next–to get lean and trim. 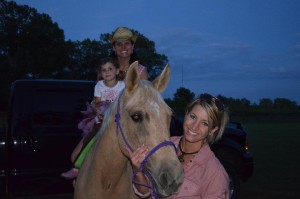 The combination of sensible nutrition, informed exercise, and spacious, safe surroundings gives Triple Lynn Farm a winning edge. Courtney Bynog has found a way to mix the daydreams of a little girl with the smarts of a motivated career woman. Love of family, love of the outdoors, and love of horses have given her the keys to enjoying the important things in life.