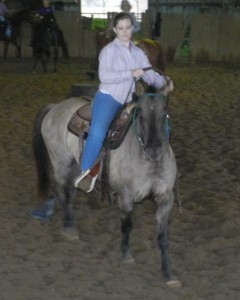 Tara practicing moving Tex’s shoulders to the outside

One of the biggest battles that those of us who teach riding skills and horsemanship face is getting people to realize that Riding is a VERB. You aren’t just sitting up there and going along for the ride. A great rider on a highly trained horse is very nearly wearing the horse as much as riding it. What I mean by this is that those horses respond to those riders just as the rider’s own body responds. You don’t really consciously think about lifting your arm, or grasping a cup off of a table. You simply do it. High level riders change leads, or move shoulders out the same way.

This poses a bit of a problem for the novice rider watching an experienced team work together, because it really doesn’t look, to the novice, like the rider is doing much of anything. The horse and rider merely go along together. It looks like magic. There are two important things to realize about what is being witnessed. First of all, the rider is doing far more than you can imagine. They are simply doing all of those things with great subtlety. Secondly, neither the rider, nor the horse started at a level anywhere near this. It took both of them years of very hard work to get there.

Riding is a very dynamic artform, when done properly. It takes a tremendous amount of mental and muscle control to ride a horse properly, just as it takes a horse with well developed balance and strength to hold itself properly in frame through maneuvers. So, the rider should be focused on their seat and position on the horse. After all, you’re riding a horse, not a saddle, Right? Put five different saddles on the same horse and you will have to adjust the way you ride to get the same results. I promise.

Now that you are balanced, how’s your seat? The seat is the accelerator and brake pedal all rolled into one. While your horse may get some impulsion from your legs, legs are really secondary and more of a correction because he didn’t move off of your seat. Our legs should give guidance, but our seat should be what moves the feet. Nope, you are leaning too far forward there. That’s better! Nope, now you’re too far back. Let’s stop him. Wow!! You really came up out of that saddle. You need to be sitting deeper and heels down and forward, or you’re gonna get launched like a SCUD missile.

Then, what about our legs? They are used for major cues like moving the fore, and hindquarters. And there are about three different positions to master with our legs, depending on how your horse is trained. We must stay focused on our legs and make sure that we are showing our horse where and how to move. Don’t accidently bump him either. You don’t want him to learn that your leg on him is something to ignore. Now more leg, he isn’t moving his hind over and he should be!!! Now let off, he moved it!!! 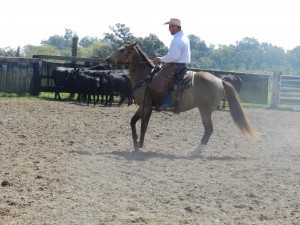 And then there are our hands and the reins. Yes, dear equestrian, there’s another major part of your body to control. Hands down, this is the one that takes people the longest to get. And you probably will help your horse out more by getting out of his face and his way than any single other thing, but, alas, it takes time. You wouldn’t believe just how dynamic a really good set of hands are. They subtly change ounces and pounds of pressure more and less in fractions of a second while communicating the will of the rider. All unseen to those but the most experienced. If you’re giving or receiving a steady firm pull, you need to change something. After all, our hands are what help the horse to come into balance and do a huge amount of communicating our will to the poor, poor, beast saddled with us. The horse’s head weighs quite a bit, and if it’s in the wrong place, well, he’s going to have to compensate somewhere to balance himself.

Then there’s the mental part. We have to be attentive and experienced enough to both notice and understand what the horse just did, what that means, and what, if anything, we need to do to adjust. Feel those feet! Where are they? Where are they going to be? Why is he resisting me there? What do I need to do? Get off of him because he’s sore? Escalate the aid because he’s being a turd? I won’t even get into people staring at the back of the horse’s head, instead of where they are going, like a marooned castaway drooling over the mirage buffet.

The complexity of all of these things being done simultaneously is exactly why we focus so much on the basics. I know. I know! I really do know how boring it is to trot circles, again, and work on those small, seemingly meaningless basic skills, again. Do remember, that you probably haven’t trotted 1/100th of the number of circles that I have, and I’m still doing it. So, why do we have to continue to work on those basics? Because, those basics must truly have become second nature to you, in order to really ride well.

To be quite honest, one of the hardest questions that I would get as I began to teach horsemanship was, “So, how do I do that?” You see, when you have done the basics for years and years and reached a level of mastery of them, something weird happens. You stop thinking about what you are doing and simply do it. It’s like walking. Just imagine if you had to explain to someone how to walk. Is it as simple as putting one foot in front of the other? Pick up your favorite pair of shoes and look at the wear patters on the bottoms of them. I’ll bet that you wear out the heel on one differently or more so than the other. You probably also wear out the ball of one foot more because you tend to pivot on that particular foot when you turn. I’ll also bet that you weren’t aware of doing either of those things, even though you were involved in every step that made those wear patterns. You see. You just walk, you don’t think about how to walk. 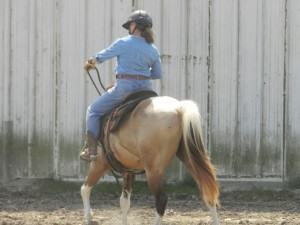 The next time you wonder how much longer you have to practice those basics, the answer will be this. Until you no longer even think about how to do them. Until they are absolutely an unconscious part of you, work on it. Until you can ride as easily as you walk, work on it.

Geez, and people actually do all of this to relax? Sounds like a lot of work to me. So, the next time you find yourself merely sitting on a horse, being carried around, ask yourself, is it called Riding or Sitting?