The Capitol Wakes Up! … to Louisiana’s 2.5 Billion $$ Horse Industry…A sleeping GIANT no more!

Senator Elbert Guillory from Opelousas, LA, was given the inspiration for Equine Day at the Capitol by a member of the Louisiana Equine Council in late February. Senator Guillory understands how important the horse industry is to our state.  The suggestion that the top youth come to the Capitol to be recognized for what they have achieved in their respective riding disciplines was quickly embraced by the State Senator.  The Senator had about 2 weeks to put it all together. Undaunted, he worked with industry leaders from around the state to make it happen.  Horsemen are passionate about what they do, and true to form they showed up in force! Senator Guillory said that we need to show that these kids are working hard every day to become strong productive citizens and that they are supporting an industry that is essential to Louisiana.

“The entire horse industry, from Rodeo, Hunter Jumpers, 4H clubs, Dressage, and Racing, to other Western and English disciplines, plays an important part in our economy. We want the legislature to know how important it is to keep the WHOLE industry growing, thriving and intact for the future of these kids,” says Daniel Lyons, president of the Louisiana Equine Council.

More than 200 people traveled from all over the state to show their support for Louisiana’s Horse Industry. The gallery in the Senate Chamber was filled to capacity as youth, their parents, grandparents and coaches watched and listened as the Senate declared March 19, 2014, Youth Equine Day for Louisiana. All of the youth in attendance were made honorary Senators for their achievements.

Dr. Frank Andrews, DVM, of the LSU Large Animal Vet School, said, “I was very impressed at how well attended this event was. The youth and adults that came to show their support of the industry did a great job. It’s important to show the legislature how essential their continued and increased support of the industry is to the equine educational programs around the state, from those on a high school level to equine studies programs at our universities, such as what we have at LSU, McNeese and LA Tech.  This support is important as these youth are the future Vets, trainers, and horsemen of our state who will ultimately support the health and well-being of the horses and the industry as a whole.” 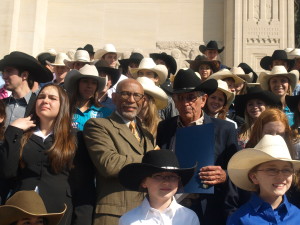 Quarter Horses and Thoroughbreds are the primary mounts for these youth, and are available in quality and quantity in large part because of the strong racing industry and breeding programs here in Louisiana. The horse industry involves equines of all breeds, shapes and sizes, though, not just racing stock.  One of the largest industries in our state, it contributes over 2.5 billion dollars a year to the economy.

“The recognition from the Senate is a great way to bring attention to what the youth are doing in our state with their horses regardless of how they choose to ride,” says Tony Patterson, the Louisiana Quarter Horse Breeders Association representative.

All the youth invited to attend had achieved state or national recognition in their sports: Steer Wrestling, Halter, Cutting, Reining, Breakaway Roping, Ranch Sorting, Racing, Cutting, Hunter Jumper, 4H, Dressage, Barrel Racing, Goat Tying, Equitation, Pole Bending, and more.  These kids need to have their stories told so that our state leaders appreciate not only the current economic impact the horse industry has on Louisiana, but also the unlimited economic benefits that will enrich the state in the future.   Bringing awareness to state and local leaders will allow Louisiana’s sleeping giant – the horse industry—to gain the recognition and appreciation it so very much deserves. The tradition of excellence in the Louisiana horse industry is long:  many fine horsemen have bred, trained, raced, and shown their way to the top—and have taught the coming generations.  Youth Equine Day at the Capitol celebrates the future of a fine tradition.

Among those in attendance were riders from the Academy of the Sacred Heart, the McNeese Rodeo Team, the LSU Equestrian Team, and the Louisiana High School Rodeo Team. These shining stars show that our state is a force to be reckoned with in the horse industry on a National and World level. 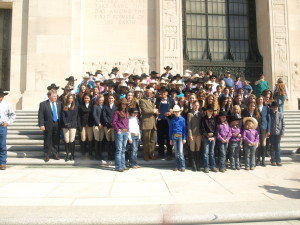 Youth Equine Day–what a great example and source of encouragement for our kids, as they continue to ride on for the future of our state.

This event was organized and coordinated by the Louisiana Equine Council and Senator Elbert Lee Guillory. Senator Guillory wishes to thank the youth, parents, and their leaders who attended and made this special event possible.

Following is the resolution:

“To commend the youth that proudly represent Louisiana in Equine exhibitions within the state and across the country and to declare March 19, 2014, as ‘Youth Equine Day at the Capitol.’

Whereas, the horse industry is an important component of the agricultural economy of Louisiana and the buying and selling of horses, creation of jobs, expenditures on horses and equestrian events have an estimated economic impact of 2.5 billion dollars each year.

Therefore, Be it resolved that the Senate of the Legislature of Louisiana does hereby commend the youth that proudly represent Louisiana in equine exhibition within the state and across the country, and that the youth here today have been duly commissioned ‘Honorary State Senators’ and are to be accorded all of the privileges entitled by virtue of this appointment this day March 19, 2014.”