On March 30, 2017 Congressman Andy Barr (R-KY) re-introduced the Race Horse Cost Recovery Act (H.R. 1804) and the Equine Tax Parity Act (H.R. 1805). The Race Horse Cost Recovery Act would permanently place all race horses in the three-year category for tax depreciation purposes. A 2008 provision that temporarily put race horses in the three year category expired at the end of 2016. The Equine Tax Parity Act would make horses eligible for capital gains treatment after 12 months, rather than 24, similar to other business assets. The American Horse Council supports both of these bills.

Depreciation is a means of recovering the cost of property, including horses, used in a business through deductions of portions of the horse’s cost over a period of years. Generally, the recovery period approximates the estimated useful life or economic life of the property. The horse industry believes a three year deprecation schedule more accurately reflects the actual time a horse will be raced and a seven year deprecation period unfairly penalizes the horse industry.

Permanently placing all race horses in the three year depreciation category would be of great benefit to the horse industry and is supported by the AHC.

The Equine Tax Parity Act (H.R. 3672) would make horses eligible for capital gains treatment after 12 months, rather than 24, similar to other business assets.

Under the current federal tax code, gains from sales by individuals of property used in a trade or business, including horses, qualify for long-term capital gains and are subject to the maximum capital gains tax rate of 15% for taxpayers earning less than $450,000 or 20% for those earning more. Since the individual income tax rate can go as high as 39.6%, the lower rate is a real advantage.

Horses held for breeding, racing, showing or draft purposes qualify for the capital gains rates only if they are held for 24 months. All other business assets (except cattle) qualify if held for 12 months.

The Equine Tax Parity Act would end this discriminatory treatment of horses under the tax code and allow horse owners to enjoy the reduced rate upon sale after holding a horse for 12 months. For most owners and breeders shortening the capital gains holding period to 12 months should be a benefit. Reducing the holding period by half would give many horse owners and breeders more flexibility to sell and market their horses. It would mean that every sale of a horse which is held for at least 12 months will qualify as a capital gain or loss unless that horse is held primarily for sale. The AHC supports this bill. 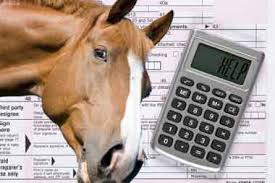 One Reply to “Equine Tax Bills Introduced for 2017: Good News”