EHA specializes in nutritional balancing in humans, horses and dogs. What this means to you is that we can determine the strength of glandular activity, stress levels and metabolic functions through hair mineral analysis, measuring specific mineral levels and ratios. We then balance these levels and ratios through diet, lifestyle changes and supplementation. We recommend food-based supplements specifically designed to improve these mineral imbalances. Our emphasis on nutritional balancing and detoxification through the use of near infrared light therapy separates us from naturopathy, homeopathy, conventional medicine, and nutritional therapies.

What Is Hair Mineral Analysis And Nutritional Balancing?

The science of nutritional balancing using hair mineral analysis was developed in the late 1970s by Dr. Paul Eck. Through his understanding of the synergistic and antagonistic play between certain minerals and their role in the body, he was able to put together a diet plan based on the individual’s oxidation rating and a supplement plan that effectively balances the system and eliminates many of the symptoms that plague our society today. After the death of Dr. Eck in 1996, Dr. Lawrence Wilson has continued this research and expounded on the work laid out by Dr. Eck.

A hair tissue mineral analysis (HTMA) is a screening test that measures the mineral content of the hair. Dr. Eck saw how this provided a blueprint of one’s biochemistry. This information was helpful in understanding the metabolic rate, energy levels, carbohydrate tolerance, stage of stress, immune function and glandular activity of the body.

Blood and urine tests can provide useful biochemical information, but they are limited to the fluids in the body. These results completely ignore the vast majority of biochemical functions taking place in the body, since these functions take place within the cells.

Reliable relationships between the levels of minerals in the hair and other tissues have been established, as a result of correlation of data from over 500,000 hair tests performed in our lab and extensive ongoing research into how minerals affect the biochemical makeup of the body. Since these minerals are crucial to the functioning of enzymes, hormones and other biochemical systems which sustain life, it is possible to read this ‘blueprint’ and see where metabolic patterns are deviating from normal.

Hair analysis may be used to help the health care professional pinpoint the development of metabolic dysfunctions, often before symptoms manifest. While mineral imbalances in the body do eventually show up in the blood serum, they will not do so until the condition is so advanced that the animal is often experiencing overt symptoms.

Tissue mineral analysis allows us to determine that an imbalance exists, before the imbalance begins to manifest disturbances on a symptomatic level. Therefore, the imbalance can often be corrected through nutritional therapy even before the animal begins to suffer from metabolic symptoms.

Many of the health problems that people and animals deal with today can be traced to improper nutrition, stress and toxins. These wear down the body by weakening adrenal activity and causing an imbalance between the thyroid and adrenal glands. We have seen amazing turnarounds in horses with conditions such as fatigue, diabetes, obesity/wasting, hoof problems, ulcers and many other conditions by simply changing feed and recommending small supplemental changes.

As a trainer and competitor, my horse’s health and well-being is important to me. Horses need to be sound and in tip top shape for the hard training we do. So when Penny, my 6 year old Quarab mare, started to act tired and lethargic, I knew something was lacking in her diet. But how to pinpoint exactly what she was lacking was the problem. I felt I was giving her the right supplements and doses, but her stamina showed another story all together. After the hair analysis results came back, we were able to pinpoint the exact minerals she was lacking and made the necessary adjustments to her diet. Also recommended was a week of rest from training. The next week, my spunky little mare was back and her endurance increased. Due to the close attention given to her diet, she has been sound and looking the best she ever has. 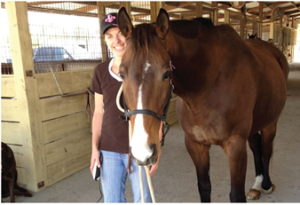 Judge is a retired racehorse that I adopted in the fall of 2007, and six years later he has navicular syndrome and an old suspensory ligament injury that was re-injured. I tried many different treatments to get him sound again, but nothing was working long term and his lameness persisted. I had never heard of a hair analysis for horses, but I thought, “How could it hurt?” When his report came back, I spoke with Mike for the first time on the phone as he reviewed the results. Mike had never met my horse, but was describing his behavior to a tee. My horses was in so much pain and this was apparent in his mineral pattern. His adrenal glands were working in hyper drive, and his potassium and sodium levels were off the chart. Mike suggested that we cut the carbs out of his diet and increase the fat (with olive oil) to slow the adrenal glands down. Within a week of making this change, Judge returned to the calm, sweet horse that he was before the onset of his lameness. Three months later, we did another analysis and all levels were within a normal range. I am hopeful that with the changes made, his body has actually healed. At the very least I have my sweet horse back. I can’t thank Mike enough for all that he has done for Judge. He has certainly taught me a way to discover what is going on with my horse and how to best treat the issues.