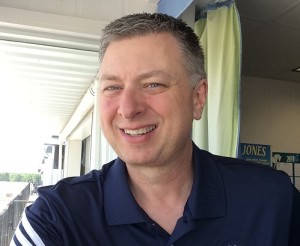 Don Stevens, the track announcer at Delta Downs in Vinton, Louisiana, loves the possibilities of his job. “When you listen to a great announcer with your eyes closed, you can visualize what’s happening and the hair on the back of your neck will stand up!” Having called over 20,000 races, Don now has the words and images and instant mental reflexes to be tops in the field. “I have to have a reservoir of thought and a library in my head,” he says.

When Don was growing up, he was always sketching and painting. After high school he took commercial art correspondence courses with the Minneapolis-based Art Instruction Schools. Although he acquired a degree, he realized that artists in the business world have to create on demand…and he didn’t like to create unless he was in the mood. “I wandered for a few years,” he says, and he ended up working for Hertz. Then he decided that he needed to do something he loved. He combined the two things he loved most: racing and broadcasting.

Don can peg the exact time he fell in love with racing. He was thirteen years old, and he begged his mother to take him to Longacres Racetrack near Seattle. “We bet on the horse with blue silks and it won! We thought, ‘That was easy!’” Don’s love of watching horses hasn’t developed into a love of sitting on horses. A career as a jockey was impossible, because Don grew to be very tall. He admits he has only been on a horse two or three times in his life, and each time in a Western saddle. “Pony ride stuff,” he says. His connection to horses is visual and verbal.

Don’s artistic skills complement his announcing. He sees every race as a series of paintings unfolding second by second. “I can see a horse’s muscles rippling. I can see a jockey’s strain and strategy. But what’s great is this: unlike a painting where I might sketch out the outline of something and plan it all out, I can’t plan out a race. It’s all ‘fly by the seat of your pants.’ When they open the gate and the favorite stumbles and goes to his knees and is dead last and I expected him to be up front, the whole painting changes. All of a sudden we went from realism to abstract real quick! I have to change gears and keep up.” A newcomer to racing who watches Quarter Horses sprint 220 yards might see only a blur. Don Stevens sees every frame of the movie…and each frame is rendered in gleaming oils.

Don’s interest in broadcasting also started early. He says that when he was a kid he was always playing with a tape recorder and making up stories into the microphone. Later he “did some radio” and, after his stint at Hertz, he went to sports broadcasting school in Oklahoma. There he met Jim Byers, legendary track announcer at Remington Park in Oklahoma City.

Jim became Don’s mentor. In the mid-90s Remington Park didn’t have a simulcast TV show, so Jim had 20 minutes of down time between races. He would record every race on his VHS recorder, then back up the tape to the start, turn down the volume and sync the tape with Don’s voice recorder and mike, and have Don call the race. “Then we’d watch the race with my call, and Jim would critique me,” says Don. “He was training me to be his backup.”

Don honed his skills with chart calling. “It’s a good stepping-stone to being an announcer,” he says. “I learned to watch races, place horses, and estimate distances and margins.” The chart caller, watching with binoculars, dictates to the chart taker the position of every horse at various points in the race. The chart records each horse’s performance in company as the race develops. Chart calling is an important job, because it creates data that inform the choices of buyers, trainers, and sophisticated bettors. Although chart calling is great training for making sense of a race, Don points out that announcing is “a totally different mental exercise.” Calling numbers is easier than calling names—and a lot easier than calling some names, such as “Flat Fleet Feet,” “Onoitsmymothernlaw,” or “Sotally Tober.”

Don also practiced his own method of announcer training. He’d get up on the track office roof by himself with binoculars, a program, and a mini recorder. Don says that the best way to learn announcing is just to do it, even if you only have yourself as an audience. In time he was skilled enough to take over Jim Byer’s job when Jim left Remington to do radio play-by-play for minor league baseball and hockey. In 2003 Don started announcing at Delta Downs.

At Remington Park, Don had produced and starred in a half-hour local FOX TV show in the early morning that recapped the previous day’s racing. When he moved to Delta Downs, he increased his media presence by doing live TV from the announcer’s booth in between all the races. “The booth wasn’t bigger than a closet,” he says. “I could reach out and touch the walls, and I only had room to sit down, look at the camera, then turn around, look out the window, and call the race. There was a little lipstick camera that made me look like I was in a fish bowl. It wasn’t much of a production!” In 2005 Hurricane Rita damaged the casino and track so extensively that racing was postponed for nineteen months. Don helped design the new announcer’s booth, which is not only more spacious (Don has to walk several feet to get from his TV host spot to his viewing window) but also has classy studio gear. A separate room houses monitors that show simulcast feeds from all around the country as well as equipment and a technical team that keeps the Delta Downs audio and video humming. Don communicates with the crew through the low-tech but high-efficiency method of a little window cut in the wall between the two rooms.

“Then we took it to another level and I started doing something other tracks didn’t do: I started answering email and talking to fans in between races,” says Don. He has made lifelong friends all around the world: Guam, England, Peru, Japan, Vietnam… The personal touch creates fan loyalty, he says.

Don says that he is always truthful and honest with the fans. “If I think a horse has a chance, I will tell it to the camera. Sometimes people call up and complain about my picks because the odds are changing, although they complain in a nice and endearing way.”

Don never loses sight of the goal: creating entertainment. He says that one reason horse racing has a problem is that the rhythm of an evening at the races is too slow for young people. “We have to stimulate and entertain,” he says. “We play music here, which a lot of tracks don’t do. We take requests and people watching all around the country love it.” The secret, he says, is putting the customer first.

Another key to Don’s success with fans is humor. He doesn’t take himself too seriously. “I’ll laugh at myself. But I also brag. If I pick three winners, I’ll say, ‘Look, you need to listen to me. I’m hot tonight!’ It’s not brain surgery: we are here to entertain and have fun!”

As all horse people know, accidents will happen when you work with equine athletes. “It breaks my heart that a young fan may see something that may just ruin that person’s thoughts on horse racing. I’ve seen heartbreaking things and it’s hard, because I’m an emotional person. On camera and on mic, you can’t get emotionally involved, because you have a job to do, which is to give an accurate explanation to the fans.” Don remembers that when racing at Remington Park resumed after 9-11, the mood of the country was somber, and his usual racetrack patter would have been inappropriate.   “We had to go on, but I had to be very, very serious, even though we were doing something entertaining.” He says that gauging the mindset of your audience requires years of experience.

These days Don Stevens has his own protégé: Michael Chamberlain, the new announcer at Evangeline Downs. Evangeline and Delta are both owned by Boyd Gaming, and Don interviewed Michael for the job. Don described his TV shows between races, and Michael was eager to try the same outreach to the public. Now Michael and Don are creating a “Delta Downs”-type TV experience at Evangeline. “I’m his biggest fan!” says Don. “Michael is doing a great job and is really building up Evangeline Downs.”

You can watch the Delta Downs simulcast at Delta, of course, and at other tracks around the country. The show is streamed live on the Delta Downs website (www.deltadowns.com). (“If it’s legal in their area, fans can go on www.twinspires.com and actually bet on Delta races,” Don says.) You can follow Don on Twitter: www.twitter.com/horsemandon. And, of course, you can go to Delta and tip your ear towards the loudspeakers as Don makes sense of the mad scramble to the finish line. 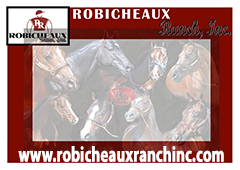 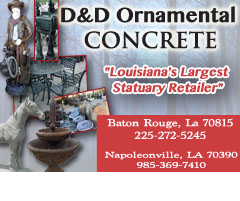 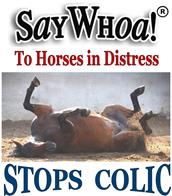 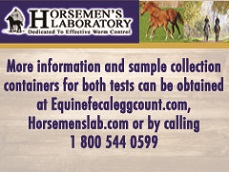 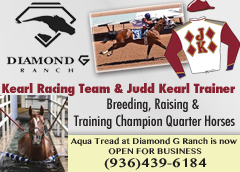 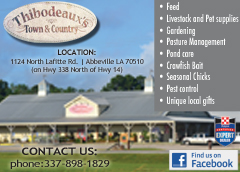 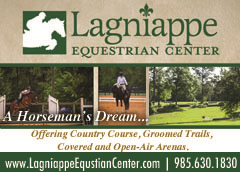