One of the most important causes of reduced fertility in the mare is endometritis. Endometritis is the inflammation of the lining (endometrium) of the uterus. This inflammation is often caused by an infection which can be due to the growth of bacteria, fungi, or yeast. These infections can be acquired during natural mating or artificial insemination; however, artificial insemination is usually associated with transmission of lower numbers of organisms.

A thorough history of the mare can help diagnose endometritis or other reasons of reduced fertility. The age of the mare, the number of foals she has produced and a history about previous (especially the most recent) foaling and post-partum period can give extra helpful information.

A normal uterus is protected from external contaminants by three physical barriers: the vulva, the vestibulo-vaginal sphincter and the cervix. Injury, anatomic abnormalities and loss of structural function of any of these barriers can permit the introduction of air and fecal or urinary contaminants into the uterus, causing endometritis. 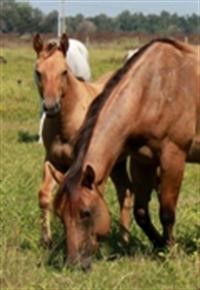 Every mare experiences a transient period of endometritis after breeding regardless of the type of mating used (artificial or natural). Most mares are able to clear contaminants and byproducts of inflammation from their uterus in the post breeding period, but some mares cannot. These mares have a disease called “Persistent post-mating induced endometritis”, which is due to impaired uterine clearance mechanisms. With close monitoring by a veterinarian it is possible to establish a successful pregnancy in mares with PMIE.

In most mares no visible vaginal discharge or elevated temperature is seen. Sometimes a shorter interval between heats can be noted. A common presenting complaint of mares with PMIE is a negative 14-day pregnancy exam. These mares do not have a shortened interval between heats, and results of culture and cytology on the subsequent heat are usually negative.

Transrectal palpation and ultrasonography are important for detecting and determining the nature of free fluid in the uterus. Mares with endometritis and especially mares with PMIE often have free fluid in their uterus. It is extremely important to examine the mare within 24 hours following mating to diagnose PMIE.

Endometritis is fairly easy to diagnose using a guarded swab to obtain a sample from the uterus for culture. Based on growth endometritis can be diagnosed, as well as the causative microorganism and its sensitivity pattern to anti microbial drugs. The mucus sample can also be submitted for cytology (analysis of the cell types, i.e. inflammatory cells) at the same time for a definitive diagnosis of endometritis. Sample acquisition should be during estrus.

A small piece of the endometrium can be obtained by biopsy as well. In addition to assessing the degree of inflammation, the presence of fibrosis around the endometrial glands can be evaluated and scored. Biopsy is especially useful in cases where a chronic endometritis is suspected. The biopsy score is used to predict the mare’s chances of carry a foal to term.

The presence of endometrial cysts or other abnormalities within the uterus can be diagnosed using ultrasonography. Hysteroscopy (examination of the uterus with an endoscope) can give additional information about the severity of inflammation, adhesions or the presence of foreign bodies.

The goal of treatment is to remove the cause of endometritis and eliminate the inflammation. Any anatomic defects in the mare’s reproductive tract should be repaired. Often a simple surgical procedure called a “Caslick vulvoplasty” (partial closure of the top portion of the vulvar lips) is performed. Other internal defects, such as loss of vestibulo-vaginal sphincter function or cervical lacerations, may need more invasive surgery.

Systemic and/or local antimicrobials based on culture and sensitivity results can be administered. Local treatment consists of an intrauterine infusion of a small volume of sterile saline combined with the appropriate antimicrobials during estrus. If PMIE is diagnosed, uterine lavage is recommended. This consists of an infusion and recovery of larger volumes of sterile saline with or without drugs that stimulate uterine contractions, such as oxytocin and prostaglandin, to clear the uterus of inflammatory products and fluid. Oxytocin and prostaglandin are frequently given systemically as well, under the direction of your veterinarian.

Endometritis in the mare does not necessarily mean the end of her breeding career. Diagnostic results and the response to a treatment play an important role in formulating a prognosis for fertility. Most acute infections are easy to treat. Chronic infections are usually associated with a worsened prognosis, and increased treatment costs. If you would like to consult a veterinarian about equine endometritis please contact:Equine Health Studies Program School of Veterinary Medicine Louisiana State University Baton Rouge, LA 70803, Telephone: (225)-578-9500