Jerry Delhomme leans back in his lawn chair in the shade of Barn N at the Evangeline Downs Training Center. Jerry is the father of Jeff and Jake Delhomme, and together the three of them run a Thoroughbred racing stable. Jake is the current President of the Louisiana Thoroughbred Breeders Association.

“Well, I’m the sire,” says Jerry. “I’m the father of Jake and Jeff, Jeff being the oldest by five years. That’s actually my claim to fame.” Jerry is modest. He deliberately stays in the background of the Delhomme family’s racing business. “Last night we had a horse running,” he says. “I had to be there early for pre-race testing, then I brought the horse up, saddled it, took it back after the race. I don’t spend time up front.”

“I’ve been training horses an awfully long time. I raced in my first bush track race when I was eight years old, in 1954. I weighed only forty-five pounds.” Jerry rode for his father, Sanders Delhomme, who was a bush track trainer, farmer, and cattleman, based in Breaux Bridge on a farm of several hundred acres.

“My dad was an excellent horseman. He was sharp. He would study his horses, and know their eating habits, their drinking habits. He had a real connection to them. The barn was close by the house, and he was there all day long.” Jerry remembers that his dad was never mean to a horse. He didn’t believe in hitting or whipping. He told his jockeys that the whip was a persuader: just a little touch was enough. Nor did Sanders mistreat Jerry: “He never raised a hand against me.”

Sanders was a colorful personality, a rough and tough man who had started out as a boy in the oil fields. He had no education whatsoever—not even first grade. He knew how to write his name…and nothing else. 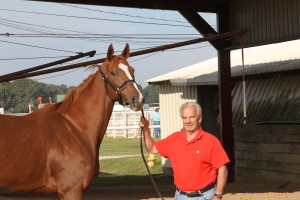 “My dad believed in flying low, keeping it small, where you don’t get hurt if you fall. But he commanded respect. He was like a king in his world: he did like him some him!” Jerry remembers that his mother was very pretty, very quiet, and very special. She also took good care of Sanders, who was the sort of man who would start shedding clothes every which way when he came in after a hard day’s work. He would also call up his wife from the bar, tell her to go kill a chicken and start some gumbo, so that he could have it the next morning. (“It’s better the next day,” says Jerry.)

When Jerry was racing on the bush tracks, the horses ran straight between rails for three or four hundred yards. “The strategy was blow and go,” he says. “Not like Thoroughbred racing, where you’ve got more space to run in and there’s more maneuvering.” Jerry says that he wasn’t really hurt when he was racing as a young boy—no broken bones, just some bumps. His father looked out for him and wouldn’t loan him out very often. “At that time, medication was wide open and some people put amphetamines in their horses. My daddy didn’t do that, and he didn’t want me on a horse that had been drugged. If there was a big match race, and someone really wanted to use me because I was light, my dad wouldn’t let me do it unless he knew the person really well.” Even though Jerry contends that old-time bush track racing was pretty safe, he does draw a comparison between his jockey days and his time in the Army as a paratrooper. “Someone asked me how many times I had jumped. 52 times, I said. They asked if I had ever jumped at night. 52 times, I said, because I always jumped with my eyes closed!”

Sanders may have chosen to “live small,” but he did have his fifteen minutes of national fame. When the family went to Ruidoso, New Mexico, for the All-American Futurity for Quarter Horses, Sanders was spotted by a movie production company. “My daddy was tall, he always wore a Stetson hat, and he always dressed well. He had that Indian look—you know, high cheekbones. He had an air about him.” The movie crew was filming the final racing scenes in Casey’s Shadow. A few weeks later the crew was filming at the bush track in Carencro, and they spotted Sanders again. They hired him.

Sanders is listed in the credits as “The Gambler.” He’s playing cards and drinking a beer, and he has one line. But that’s enough to get a check in the mail every time the movie is shown.

After a boyhood spent in the unregulated world of Cajun racing, Jerry became a boss who makes sure others follow the rules: he was a state and federal meat inspector and supervisor for thirty-eight years.

“I supervised 25 or 30 plants. I was in charge of grading the beef. We don’t have much prime here in Louisiana, but we do have choice and good. They changed ‘good’ to ‘select’ because of the conflict that happens when you say, ‘Oh, this calf is good’—what do you mean by good?” Jerry explains that the next two categories are standard and utility. Schools use a lot of utility grade meat. “It’s more reasonable and leaner. You can control the fat content easier, because it doesn’t have that extra marbling that comes from feeding corn.”

Even though Jerry traveled all over the state, he lived in Breaux Bridge, near the family farm, and he kept in the racing business. In those days he’d drive to the track in the government vehicle around 5 AM, “hours before I had to start work, then park by the back fence, jump the fence, and take care of two or three horses. Of course, I couldn’t do that now, because the official trucks all have GPS!”

Jerry’s wife Marcia is one of six girls and grew up in the little community of St. Martinville, just sixteen miles south of Breaux Bridge. “We met in kindergarten,” says Jerry. “Then we were in 4-H together. An off-and-on romance. She was a city girl, and it took a while for her to get used to country life. I’d go to the barn at 4 AM and she’d get up later to go to work for the School Board. It’s a different way of life, but she’s accepted it. We have a tremendous relationship.” Jerry talks about Marcia proudly. He says that she is an avid tennis player and that she graduated from the University of Louisiana at Lafayette with a degree in secretarial science. She could have gone to work for a law firm, but she chose to work for the School Board so that she could be home during vacations to be with their sons Jeff and Jake. “She’s a good mother to our boys. They did well in school because of her,” Jerry says.

Jeff, the elder brother, had a football scholarship to McNeese University in Lake Charles. Jerry says that Jeff was the brother with the most athletic talent, but he tore his ACL during his senior year at McNeese. Back then, says Jerry, doctors didn’t repair that sort of injury with arthroscopic techniques, and the rehab wasn’t as good. The injury ended Jeff’s career.

Jake was accepted at Tulane and his mother’s alma mater, the University of Louisiana at Lafayette. He couldn’t decide which school to choose. He even asked his father’s advice. Jerry says, “I asked him where he wanted to live when he graduated.” “Right here,” said Jake. Jerry told him he should consider going to school at UL and making connections.

Jake chose UL. He was the starting quarterback his freshman year, an unusual accomplishment. He led the team to three winning seasons and capped his senior year with a win over Texas A & M. After graduation, he joined the New Orleans Saints and began a career in the NFL which culminated in a trip to Super Bowl XXXVIII with the Carolina Panthers. Although the Panthers lost at the very end to a field goal, Jake made a stunning 85-yard pass during the game, an NFL record which still stands. Jake went on to play for the Cleveland Browns and the Houston Texans, but more-frequent injuries convinced him that he should retire in 2011. Fortunately, he had a fall-back plan: racing.

These days Jerry, Jeff, and Jake work for themselves, training, buying, selling, and breeding. Jake finds names for his horses in the sport of football: Zip Motion, Practice Squad. One horse is even named Woozy, in honor of a typical NFL-quality concussion. (Jerry maintains that Jake had only one serious concussion in his NFL days. As Jake was lying on the field, a coach held up two fingers and asked, “How many fingers?” Jake said, “Tuesday.”)

Jerry says, “I don’t own any horses myself; I just help with Jeff and Jake’s horses. But we make all the decisions together. We discuss what each horse needs. It’s now full time for all three of us…It’s a pleasure being able to work with your family.”

Fathers and sons, continuing the traditions.