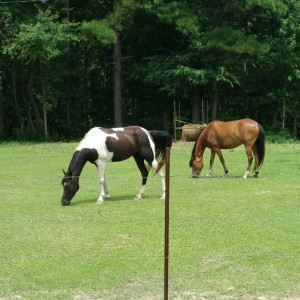 They realized that they needed more property. They cleared trees and built fences and ran wire.  They built a bigger barn.  They rescued horses and Pam developed an ability to communicate deeply and kindly with the animals.  People brought troubled horses to her.  Jeff and Pam bought yet more land, and moved the fences yet again…

One day, Jeff was working alone, yanking T-posts out of the ground with a chain attached to the loader on his little tractor. He had to keep getting off the tractor to snug the chain around the post, and half the time the chain slipped off before the post was free.  If everything worked correctly, he still had to get off the tractor to unwrap the chain and drop the post.

“I’m getting too old for this,” he thought.

Thus was born the idea which became the Easy Way T-Post Puller. 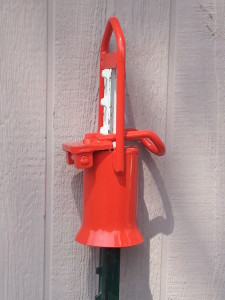 Inventing comes naturally to Jeff. He’s worked on machinery from all over the world, not just on the mechanics, but on the electrical, electronic, and hydraulic systems.  He’s done machining.  “I’ve seen how all types of things work,” he says, “and I’ve always been able to modify equipment for people.”  Now that he is near retirement, he looks forward to tinkering in his shop full time and letting his imagination roll.  He has his own milling machine, drill press, welding machines, and small tools, and he can make his own prototypes.  He can illustrate devices with AutoCAD – the powerful computer-assisted design program used by engineers and architects.

One thing Jeff does NOT have is an inclination to send his inventions to China for assembly. The T-Post Puller is made in America.  In fact, it is made in Mississippi, and the Puller already has fans there.  “They’re using it at the Mississippi State Fairgrounds in Jackson. 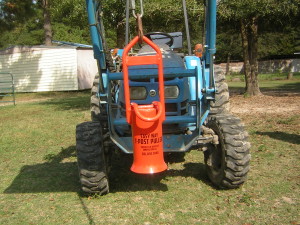 They have to set up T-posts in different areas to border off different animals at different times.  They used to pull posts with a fork lift.  They would raise the fork up to the tip of the T-post, a guy would push against it, and they would try to lift it out of the ground,” says Jeff.  Of course the fork would slip off the post.  Now the grounds crew in Jackson are believers.

What is Jeff going to invent next? He won’t say for sure, but he hints that the perfect accompaniment to the T-Post Puller would be something that  winds up old barb wire.