The Connemara pony originated in the rough landscape of the Connemara region of County Galway in western Ireland. The land is rocky and mountainous, and the Connemaras are particularly hardy and sure-footed, with strong backs and iron-like hooves.  The farmers of County Galway would capture the wild ponies in the mountains and train them to do it all: pull plows, pull carts, gallop over stone walls, or teach kids to ride. The breed developed a reputation for toughness of body and gentleness of mind.

The modern breed may have descended from Scandinavian ponies that evolved in the 13th century into the Irish Hobby. The Hobby, a now extinct carthorse breed, supposedly crossed with Andalusian horses escaping in 1588 from ships of the Spanish Armada that ran aground on the Irish coast.  The modern Connemara Society was founded in the 1920s to preserve the breed from further genetic dilution from infusions of Hackney ponies and Arabian and Thoroughbred horses that began in the 18th century.  Today the breed is best known as a sports pony, versatile enough to be shown by both adults and children in dressage, jumping, three-day eventing, harness driving, and endurance riding.  Connemaras show up in English and Western Pleasure, too—and wherever else amateur riders, young and old, need a dependable mount. 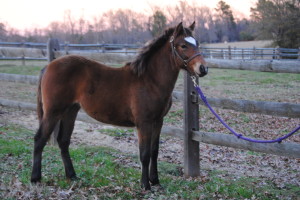 In recent years Connemaras have been crossed successfully with Thoroughbreds and other light horse breeds to increase the stamina, hardiness, can-do attitude, and courage of those offspring in the Olympic disciplines.  Notable examples of the success of these crossbreds include Stroller, 14.1 hand winner of the individual silver medal in show jumping for Britain in the 1968 Olympics; Marcus Aurelius, aka “the Bionic Pony,” that took American Mary Anne Tauskey to team gold medals in three-day eventing in the 1975 Pan-American games and again in the 1976 Olympics; and Seldom Seen, the sparkling grand prix dressage partner for American Lendon Gray in the 1980s. 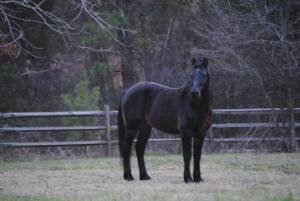 The Breed Standard for the American Connemara Pony Society, approved in 1980, codifies centuries of breeding in Ireland, with an American twist. The English and Irish societies specify that the Connemara should stand no higher than 14.2, the official “pony” size; the American society allows Connemaras over 15 hands to be registered, perhaps reflecting the interest of adult amateur riders in the breed. No matter how tall, Connemaras are officially called ponies.

Connemara colors include gray, dun, black, bay, brown, chestnut, palomino, and roan. Paints are not allowed. The Irish and British societies allow “black-eyed creams,” but the American society does not mention cream as an approved color.

The breed standard specifies that the Connemara, although “short-legged,” should cover a lot of ground. Excessive knee action is a fault. The shoulders slope well, the cannon bones are strong and short, and the neck offers “a good length of rein.” Eyes are large and the forehead is wide.

Michelle Taylor, of Benton, Louisiana, owns the black/brown stallion Aluinn Bernie O’Brien, registered with the American Connemara Pony Society. (“Aluinn” identifies Bernie as the product of a farm in Virginia.) “Bernie has a great temperament. I put four-year-olds on him; he knows when he has a kid on his back. He’s so gentle. But he also knows his job: he can do combined driving and even eventing. He does a nice dressage test.” Michelle explains that she can hitch Bernie to a cart—without any help. A lot can go wrong during hitching—a horse can take off or turn upside down while the human is struggling with traces, shafts, reins, or collar. A second person should hold the horse during tacking up. But Bernie stands still, showing off his Connemara calm.

Michelle has bred Bernie to Connemaras and to Selle Francais, the French warmblood breed. Although Bernie is only 14.0 hands, he gives size to offspring in his own breed. He has only a few white hairs on his forehead, but he stamps his children with stars. Michelle bred Bernie to her daughter Hannah’s Pony Club mount, the Connemara mare Molly Brown. “Ryan” – short for “Black Willow Farm’s Star of Orion” – is a typical Connemara success: he placed at the American Eventing Championships in Florida, at Beginner Novice. Watch for Ryan as he moves up the levels!

Cosette is Bernie’s daughter out of Michelle’s Selle Francais mare Glorie. Cosette has inherited the level-headed Connemara character. “Nothing bothers her,” says Michelle. She points out that the Connemara’s sensible mind is such an established attribute that it gets passed down when mixing breeds. “You can’t buy a better temperament,” says Michelle.